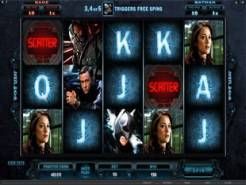 Play Now
The Dark Knight Rises was the last in an epic trilogy of Batman movies so it only made sense to create a slot game after it and allow the excitement to continue. The Dark Knight Rises has five reels and 243 ways to win but it also has characters and scenes from the movie. The added features are incredible and include a Free Spins Accumulator, Symbol Scramble, Split Wilds, and Choose Your Feature: Bane or Batman, Rolling Reels, Super Stacked Wilds, Extra Wild Blasts, and Heat Seeking Wilds. Play with coin values of a penny and up to five cents with a max of five coins allowed per line. The top jackpot is worth 1500 coins. Try The Dark Knight Rises for free or play for real money. The symbols on The Dark Knight Rises slot include many of the leading characters from The Dark Knight Rises movie, including Batman, Bane, and Police Commissioner Gordon, the Cat woman, and Batman’s double-crossing friend Miranda Tate. The wild symbol is the Dark Knight Rises logo and will replace all other symbols, except for the scatter symbol, to create more winning combinations. The Fusion Reactor is the scatter symbol. There are a lot of added features that need explaining. The Free Spins Accumulator is used when a fight between Batman and Bane breaks out on any non-winning spin with free spins and multipliers awarded throughout the fight. The Symbol Scramble comes into play on any non-winning spin. The symbols rearrange themselves to create the best possible winning combination. Split Wilds offer the possibility to create more winning combinations, including 6-of-a-kind, which pays double a 5-of-a-kind payout. Choose Your Feature: Bane, get 28 free spins with a 2x multiplier, Rolling Reels and Super Stacked Wilds! Choose Your Feature: Batman and get 33 free spins at a 4x multiplier with an Extra Wild Blast. You get to choose a high-paying symbol to be an extra Wild, and Heat Seeking Wilds, which can split into two, to create a unique 6-of-a-kind win!
Play Now
Previous slideNext slide

Where to Play The Dark Knight Rises Slots