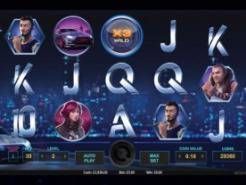 Play Now
Anyone fascinated with fast cars, being a speed demon and racing will smile at the new slots game when they play Drive Multiplier Mayhem online slots . Players will enjoy theability to combine driving with the thrill of a slot machine. Anyone who is new to NetEnt Casinos or those who have been playing a long time will enjoy the different aspects of this game. Keep in mind this online slots can be played on the personal computer, cell phone and mobile table device at your favorite NetEnt Casino.

Drive: Multiplier Mayhem is a video slots game by Net Entertainment with 15 paylines. This slots game has 5-reels and it is a non-progressive game. There is a maximum 15 coin wager and total wagers per reel range from $0.15 up to $75 a spin. Symbols in the game include the race car drivers Twitch, Hamaki and Bruiser. Other symbols are the Multiplier Wild, Nitro, Tens, Race Cars, Face Cards and Aces. Players will look forward to the amount of multipliers contained in this slot game. When multiplier wilds land on the reels, there is an additional multipliers to winnings up to 5x. Drive Multiplier Mayhem was created for speed with the sound of the engines reving up when the reels are spun. There are wilds, scatters, multiplier wilds and a Nitro meter to keep you entertained. The jackpot is a cool 150 coins, and can be distributed as up to 1200x in the regular game, and increasing up to 5000x during the Free Spins feature.

As players can see when you play Drive Multiplier Mayhem Online Slots, this is an opportunity to try a new and exciting game with wonderful features and more multipliers than most players have ever seen.
Play Now
Previous slideNext slide