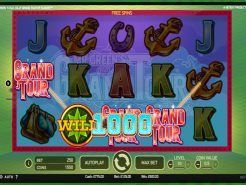 Play Now
Mr. Green’s Old Jolly Grand Tour is a five reel and 25 pay line slot from NetEnt software. Added features here include Wild Respins, Expanding Wilds, and Wild with 2x Win-Multiplier. Mr. Green’s Old Jolly Grand Tour has a British spin to it. Mr. Green journeys around Europe, which was common back then. Mr. Green is a fine gentleman with outstanding etiquette. Because this is custom content, players can enjoy it only at Mr. Green casino. Play with coin values as low as a penny up to fifty cents and as many as ten coins per line. Some of the symbols used in this slot game include the Anchor, the Leather Satchel, the Lantern, and the Horseshoe, a locomotive, a horse-drawn carriage, a steamship, and a hot air balloon. The Compass Star that is labelled WILD is the game’s wild symbol. It only lands on Reels 2, 3, or 4. This symbol is considered to be a multi wild in the base game and will flip over to reveal special features, like the Expanding Wild, which enables a single-tile WILD emblem to enlarge and become a full-reel, 3-tile high totem or the Re-Spin Wild which will spawn a re-spin of all non-Wild Symbols. During the re-spin, the Re-Spin Wild will remain locked in place and will continue to be used as a substitute symbol for the re-spin. The 2x Wild doubles the win amount of pay line matched-groupings that the Wild Symbol helped complete. It is possible to land on three Multi-Wilds across three reels. When this happens you get an 8x multiplier for all wins that include the wild. Landing on three or more Free-Spins symbols will triggers 10, 20, or 30 bonus spins. The spins will be played in bonus reels enhanced with more Multi-Wild Symbols. The Bonus Game Multi-Wilds occur in multiples after a single free-spin.
Play Now
Previous slideNext slide