Tomb Raider Secret of the Sword 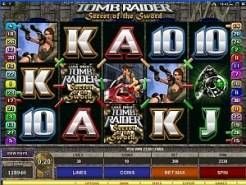 Play Now
Lara Croft fans, rejoice! Download and start playing at Tomb Raider Secret of the Sword Slots . This is a video slots game that can hold its own with any other slots game out there, even those in the brick and mortar casinos. While this may seem like tall order for an online casino game, this selection from Microgaming will certainly live up to the expectations of slots lovers everywhere.

Tomb Raider Secret of the Sword is a five reel, 30-payline extravaganza of animation and sound. The game’s theme corresponds to the action seen in Tomb Raider films and comic books. Game play centers on helping the Lara Croft to find pieces of a lost sword, which results in bonus payouts. The graphics are simply breathtaking, almost photo realistic.

The sound quality of this Microgaming selection is excellent, and this fact will surprise most players because of its lack of monotony. Instead, the musical score for the game creates an element of suspense that compliments the action theme beautifully. Graphic reel symbols include an Excalibur Key, Guns, a Bike, a Passport, the Cityscape, a Waterfall, Lara Croft’s Portrait, and the high ranking card symbols Ace, King, Queen, Jack, and Ten.

How Much To Bet?

Speaking of wagers, the ones offered by Tomb Raider Secret of the Sword are substantial enough to grab the interest of even the high rollers who visit online casinos. A bet of 10 coins per line with the wager set at $0.02 will net a player the top jackpot of 7500 coins or $15,000.00 when five of the Lara Craft Portrait reel symbols appear on an enabled payline. Another jackpot of 2000 coins or $4000.00 is available when five of the Waterfall icons settle on an enabled payline.

The Wild Symbol is the portrait of Lara Croft, and it acts as a substitute for all of the other reel symbols except for the Excalibur Key and the Passport. The Scatter symbol for the game is the Excalibur Key. Whenever two, three, four, or five of these symbols appear on the reels, your total bet will be multiplied by two, three, twenty or one hundred times accordingly.

Three or more of the Excalibur Key one a payline also triggers ten Free Spins. These spins are special in that they have what is known as the Rolling Reels feature. Whenever a winning combination appears, the symbols that represent the win will fade from view and are then replaced by new reels. Free spins cannot be retriggered.

Tomb Raider Secret of the Sword also features a Super Mode that is activated randomly. Five free spins are awarded that include Wild symbols to improve the chances of a win. The Bonus feature of the game is called Global Adventure. It is triggered when five of the Passport reel symbols appear on an enabled line. This feature produces wins such as hidden multipliers and bonuses, and may also trigger the Hidden Treasure Bonus.

Players will see a screen containing three question marks. Choosing the correct symbols will help players garner wins such as X2 multipliers, a Win All symbol, or the Shootout Bonus game. In Shootout, players will choose from fifteen golden disks, many of which will reveal prizes. Lara Croft will assist you in shooting the disks.

Tomb Raider Secrets of the Sword will thrill gamers of all ages who love the Tomb Raider character, and who enjoy a well-designed game that offers many chances to win.
Play Now
Previous slideNext slide

Where to Play Tomb Raider: Secret of the Sword Slots